Omaha Nebraska: Visit This Midwest City for More Than Steak 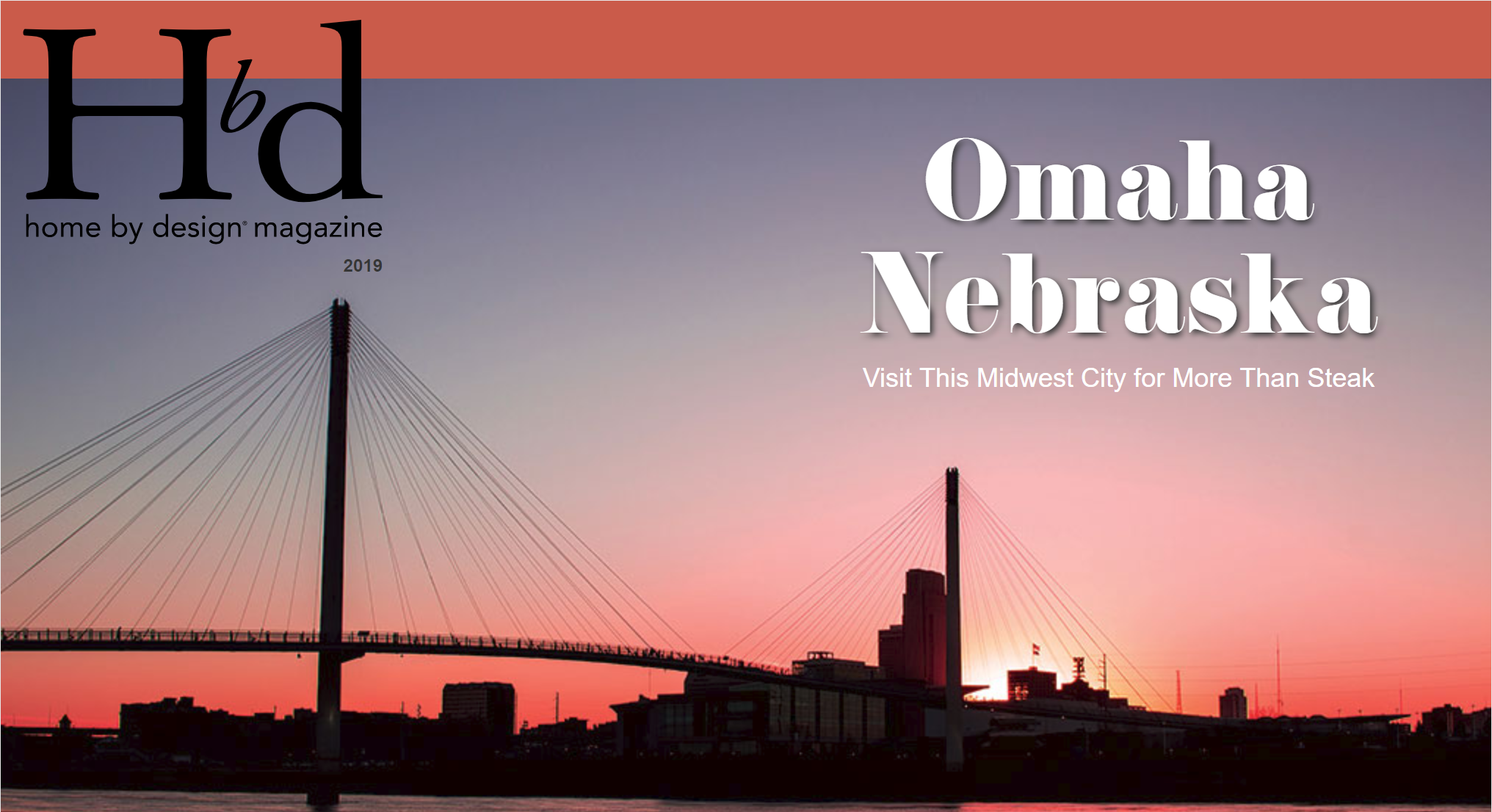 ABOVE: Omaha’s 3,000-foot-long Bob Kerrey Pedestrian Bridge spans the Missouri River. BELOW: The city is surrounded by the rolling farmland writer Willa Cather made famous in the book O Pioneers!

There’s a reason billionaire Warren Buffett holed up in Omaha, Nebraska and never left—he is still living in the stucco house he bought for $31,500 in 1958. It’s because Omaha is a pride of the plains, a hipster treasure trove of toothsome restaurants, exquisite shopping, and cultural offerings that would fit right in on New York City’s Museum Mile, all within the welcoming comfort of the Midwest. Purported to be one of the world’s top zoos—and arguably the best in the middle states—Omaha’s Henry Doorly Zoo and Aquarium is home to the world’s largest indoor rainforest and even its opposite: the largest indoor desert. But it’s especially worth going now because they just debuted Asian Highlands, a $22 million ode to Asian animals. There you will feel like you’re in the Himalayan Mountains, what with the tufted deer, amur tiger, and snow leopards at every turn.

Another must-see: the Joslyn Art Museum, which houses 600 original Currier & Ives prints and paintings by everyone from Mary Cassatt to Winslow Homer. The 1931 art deco building is a showstopper itself, made of thirty-eight types of marble from around the world including Italy, France, Germany, Belgium, and Morocco. Head to the light-filled atrium for lunch in the Café Durham, where the changing menu includes dishes like Shrimp and Scallop Risotto Milanese.

Don’t leave the city without trying your hand at axe throwing (yes, axe throwing) at the new Flying Timber Axe Throwing, where you can pretend you’re Paul Bunyan with an hour-long session before returning to real life.

Speaking of food—Omaha is a foodie mecca, with a burgeoning locavore scene that rivals Portland, Oregon’s. Kick-start your day at newly opened Amateur Coffee, owned by husband-and-wife team Jacob and Jasmyn Wichert, with single-origin brews like Sweet Tart, cultivated in Nicaragua and locally roasted to show off its subtle notes of watermelon, kiwi, and grapefruit (hence the name).

The spot for lunch? New restaurant Mode de Vie, a Southern and Francophile favorite, where you’ll find dishes such as broiled oysters with bienville sauce, mimolette cheese, and fougasse bread.

For dinner in Omaha, steak is a must—and Monarch, which recently opened in the ground floor of the Hotel Deco, built in 1930 and just renovated—is the place. All the steak on the menu is as local as it comes and dry-aged in-house; order the wagyu tomahawk chop with blackberry and pine nut cavatelli on the side.

Experience a lush break from the plains at the 100-acre Lauritzen Gardens botanical center, where gardens include an English perennial border that took its cues from those in Victorian England.

Opened this fall, Made in Omaha is the spot for—you guessed it—wares made in Omaha and Nebraska at large, like artisanal salted chocolate caramels from Lulubee and leather tassel keychains.

Stylish folk make a beeline for McLovin, where they find menswear including high-end togs tailor-made for the executives of the five Fortune 500 companies located within a five-mile radius in downtown Omaha. Brands on offer: Woolrich, Grown Alchemist, and made-in-Italy Zanetti. 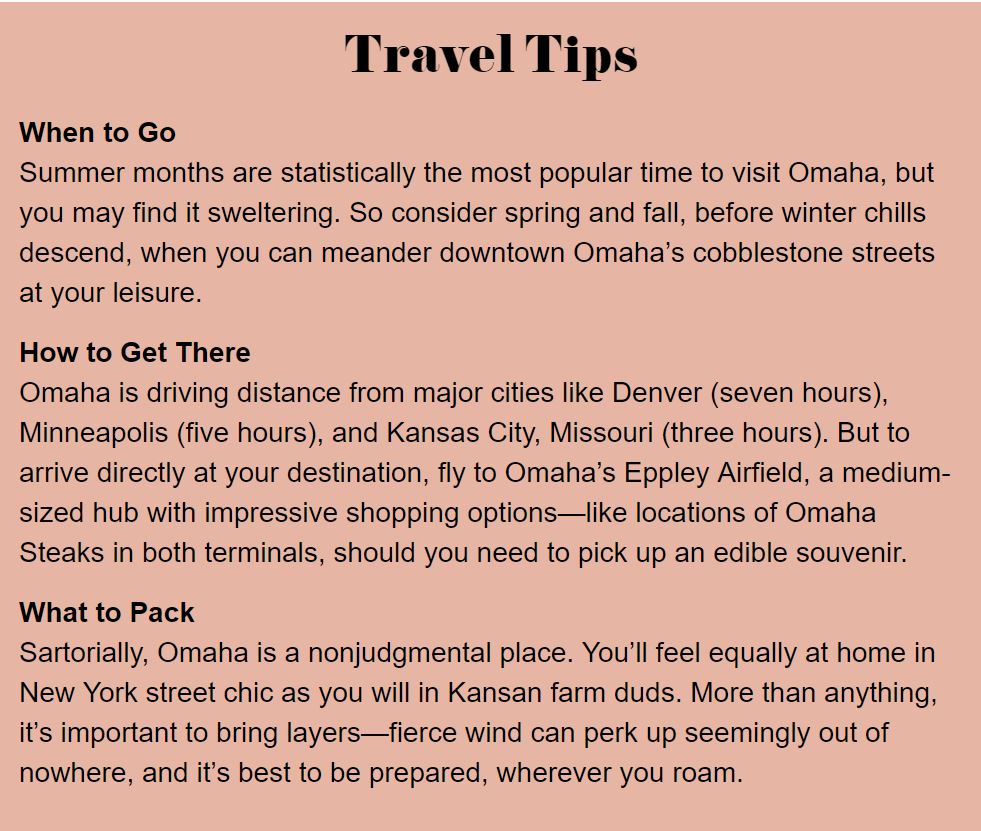 Just opened in the Capitol District, the 333-room Marriott is twelve stories of luxury, where the sleekly designed rooms are fitted with 52-inch smart flat-screen TVs and floor-to-ceiling windows overlooking the cityscape. On the horizon and set to open in spring 2019: downtown’s boutique Peregrine Hotel, where all 90 guest rooms will house a wooden peregrine figurine—a nod to the property’s namesake as well as the bird that, once nearing extinction, is now flourishing in this state.