Pack Leader: A Happy-Go-Lucky Feel For A Family Home

A HAPPY-GO-LUCKY FEEL FOR A FAMILY HOME

KIDS AND PETS WERE AT THE FOREFRONT

of this phenomenal new-build in Newport Beach, California. “They really needed a space to feel truly at home with all of the comforts for every member,” says Brooke Wagner, owner and principal designer of Brooke Wagner Design in Newport Beach, who designed the 7,000-square-foot home for an active family that loves to travel and entertain. “[My client] wanted to truly create a space that her family would love.”

In sync with the laid-back lifestyle that is synonymous with Southern California, the family’s distinctive environment combines deluxe design with lighthearted elements for a refreshing dwelling that looks as good as it feels. Even the outdoor space is unique for the area because the front elevation is higher than the back. “The back of the house goes into a gully that leads to the Environmental Nature Center, which gives the property depth and privacy. The basement is a full walkout and opens to the pool,” she explains.

Indoors, whimsical elements helped this design stand out from too-traditional interiors. For instance, the wallpaper that backs the built-ins in the great room really made them pop, says Wagner, while the Lucite cubes make the Lucite stools in the kitchen more cohesive. The colorful seat cushions add a visual kick. “The Lucite stools were a client fave,” she adds. The soapstone countertops contrast with the dark cabinetry, while relating to the dark range. Another aesthetic connection exists between the island slab in the kitchen and the matching fireplace surround in the living room.

In the dining room, the forty-two-inch-wide host and hostess seats make a statement. The innovative teamwork with her client led to many delightful details that Wagner says were fun to do. “The client’s initial is an ‘H,’ so we tried to add the initial in some spaces like the bottom of the dining room table that features a vertical ‘H’ on either end as well as using some Hermѐs fabrics throughout.”

Wagner credits her client and their collaboration for the success of the project. “She is really involved and had great insight, while giving us room to be creative,” says the designer. The artistic wall treatments, like the reclaimed wood wall in the game room and the gold-brick tile accent wall in the spa bath, are examples of this. “We always like to add wallpaper where we think it will add the most depth to a room,” adds Wagner, which she did in the master bedroom and guest room.

Whimsical touches include a papier-mâché lion’s head in the playroom and the graphic “Wash Behind Your Ears” tiles in the Jack-and-Jill bath. “The saying was the client’s idea,” says Wagner. “We just needed to figure out how to execute it to fit her vision.” 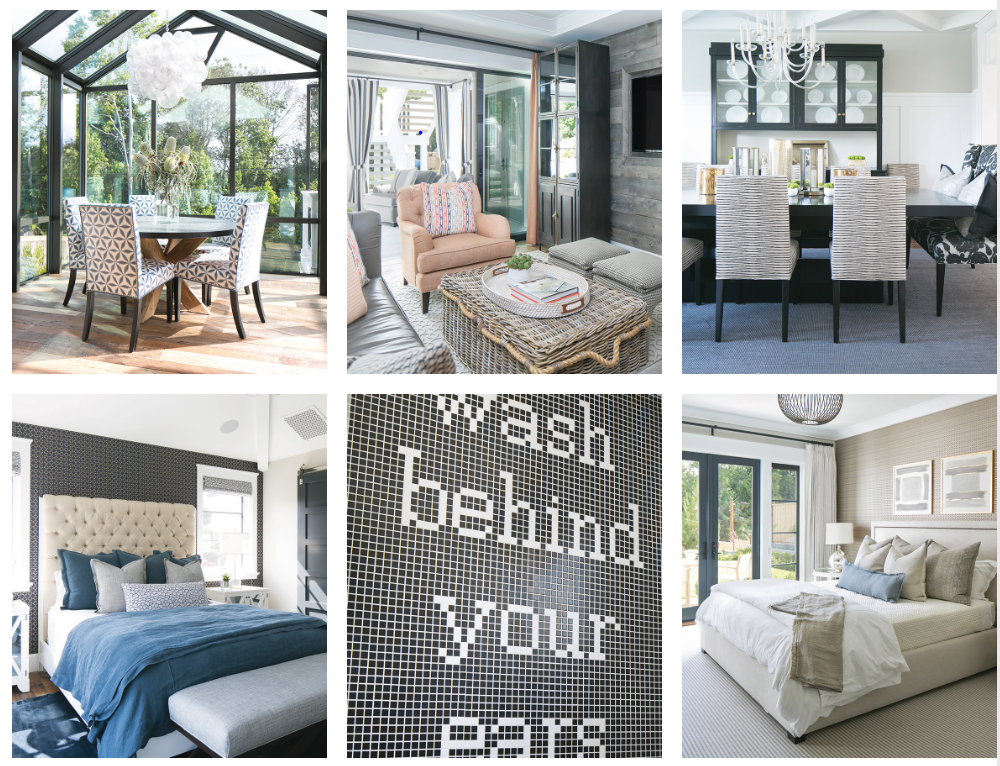 The white kitchen is crisp and clean, with a regionally appropriate sunny disposition. The bedrooms benefit from distinctive wallpaper applications. In the Jack-and-Jill bathroom, the ingenious “Wash Behind Your Ears” tiles relay a gentle reminder in a playful way. The pool and spa can be accessed from the lower level of the new-construction home.

When designing with children and animals in mind, it’s important to keep a sense of humor about things. The home should be functional, practical, but above all, playful. “Our client was great and [she] doesn’t take herself too seriously,” says Wagner. “So we got to add those little details that came out so fun.”

When you think of whimsical, you might envision Disneyland or a fairy garden. But subtle whimsy can lighten your interior decor and make it inviting to boot. Try adding some elements like designer Brooke Wagner did in this California design.